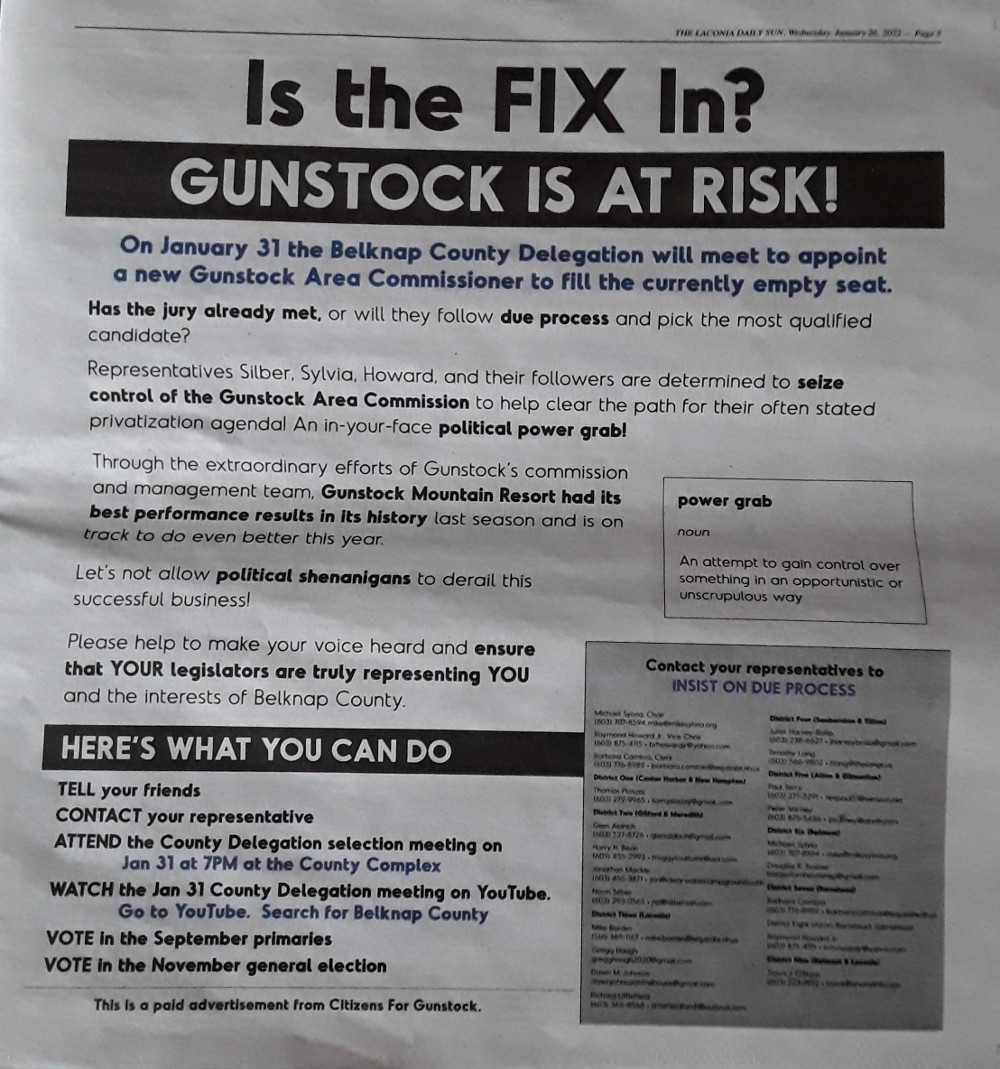 In the age of misinformation and mass formation psychosis rationality and reason are hard to find.

The shadowy group known as Citizens for Gunstock (CfG), aided and abetted by The Laconia Daily Sun have been busy politicking against those whom seek integrity in the operation of our beloved little ski area.

They falsely claim that the public will not be heard regarding the selection of a replacement Gunstock area commissioner. The truth is that Monday’s meeting will begin with public comments. In fact, all delegation members’ contact information is public and we listen to the people daily.

Some claim that our selection process is in some way nefarious and unnecessarily rushed. It is hardly a secret that commissioner Gallagher resigned. The request for applicants has been advertised in the newspaper for a couple of weeks. At this point we have applications from three very well qualified candidates. All delegation members have received those applications and they will have 4 days to review them, and if they wish, contact the candidates. If you have not been following the issue, there is in fact a need to fill this position without delay. The current board is set in a deadlock with a strong possibility of 2 to 2 votes. Delaying to fill the void would be irresponsible. The delegation can override my position but it is my duty to give them that choice expeditiously.

The “sneaky Petes” of CfG misdirect the public with a charge that due process is being denied. Using that term invokes feelings of violation of constitutional protections. Marxists love to yank your ‘feelz.’ Due process is a protection for someone accused of wrong doing. Candidates for a position are due equal consideration. They will receive such at our meeting as they always have had in the past.

Speaking of due process, all of the controversy regarding Gunstock arose from the commission’s zeal to rid itself of one of its own. They did so without giving that commissioner due process, instead they dropped unsubstantiated claims in the laps of the delegation. One is left to wonder why they couldn’t simply operate with perpetual 4 to 1 votes.

The CfG trot out the ‘poison the well’ fallacy, suggesting that the ‘game is rigged’ and condescendingly claiming that your elected representatives are nothing more than political lackeys. Such insults are contemptible and shameful, and are beneath response.

I will note a couple of problems with the advertisement seeking applications. First, it was supposed to read that the deadline for applications be received at the county office on Friday at 3pm. This will allow the weekend for the delegation’s review. Second, it also incorrectly states the position will be a five year term. This is my error. While the delegation has in the past filled a vacancy for a five year term, the enabling statute is clear that the vacancy is to be filled for the remainder of the vacant term. I apologize for that error. Both of these issues with the ad are inconsequential as the law would allow the delegation to fill the position without an application process.

Unfortunately we may need to address the previous improper filling of the vacancy created when commissioner Nix resigned in 2020. Technically the position filled by Rusty McLear would have expired when Nix’s would have ended. Someone might claim him to be a de facto office holder. More drama incoming?

It has been asserted that I am a supporter of privatization of Gunstock. This is simply not true. While I am open to considering such a move, I have not made a commitment to such action. Sadly the leftist are unable to understand nuance.

The Marxists at CfG have selected their choice of candidates for the position, Heidi Preuss. They are lobbying hard to put this Kiedaisch acolyte in place. Fortunately this candidate is easily dismissed; she applied for the position last fall and failed to attend the meeting. She even published a letter in the Laconia Daily Sun claiming to have been railroaded away from the meeting.

In their reporting on candidates The Laconia Daily Sun couldn’t resist putting their thumb on the scale, dredging up old charges of political in-correctness against Doug Lambert. I’m sure they are digging for dirt on Dr. Strang, perhaps he has prescribed hydroxychloroquine or ivermectin!

Behind the scenes it is hard to say exactly what is going on, and this is the source of the problems at Gunstock: secrecy. Commissioner Kiedaisch has a grand plan but only shares bits and pieces with the public. It leaves large areas open for speculation. For instance, he has stated that the plans for a hotel on county property will be locally owned. How can he know that a local owner will provide the best contract for the lease of a site? More questions quickly fall behind that one. Will the developer have a preexisting relationship with any of the commissioners?

Another issue with Gunstock is the local character of the ski area. As a county owned asset many local residents have grown up on the slopes of Gunstock. The vision of commissioner Kiedaisch of the future for Gunstock, although not explicitly stated, is in the image of Deer Valley Resort. The model of Deer Valley focuses on less crowding and higher ticket prices. This is skiing for the elite. If you have attended any recent meeting of the commission, you will know that is their current direction. And where has Ms. Preuss lived for the majority of the last couple of decades? Park City, Utah home of Deer Valley. I wonder if her return to Laconia was coordinated with commissioner Kiedaisch’s appointment?

What the delegation needs to hear from the public is their opinion of this model that is being promoted by commissioner Kiedaisch. Will future generations of local children be welcome, and be able to afford to learn to ski at Gunstock? I have no doubt that the elite will be coming out on Monday to protect their interests, but will we see the hard working citizens of the county?