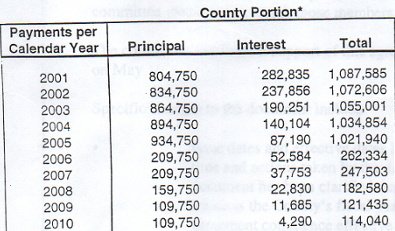 Rep Raymond Howard has facts on his side

2018 has presented Gunstock with some tough sledding on the fiscal front.  As we approach the November 6th election Gunstock and its financial woes has been used as political fodders.  In recent letters 1, 2, to the Laconia Daily Sun a candidate (a current Gunstock commissioner) and a former Gunstock commissioner have written a jumble of incoherent misleading scribblings aimed at the integrity of Rep. Howard.

One of the problems of a government run business is moral hazard.  The taxpayers are on the hook for any failures but management reaps rewards if things run reasonably well.  In the ski industry 2-3 years of bad weather can be expected and plans for such need to be in place.  The late 1990’s put Gunstock in a position which required a hard choice; shut it down, or go to the taxpayers to keep it running.

On May 11, 2000 the County Delegation handed the bill to the county taxpayers:

Contrary to Rep. Howard’s critics the county taxpayers are on the edge of having to pick up another $6 million in bonds which Gunstock is having difficulty servicing.  The Gunstock Commission has failed over the past 17 years to build enough reserves  to get through one summer without a Revenue Anticipation Note.  Let’s not forget the downgrade of the county’s bond rating earlier in 2018 whereas Moody’s cited Gunstock as a risk factor in that decision.

This should not be taken as an assault on any of the current or past commissioners.  The problem is that government is not capable of running a business and shouldn’t even ever attempt to do so.  It’s time to find a way to turn over the keys to a qualified operator.