As the year comes to a close, we will soon have final budget figures for 2019. There are two possible labor cost items that may effect the 2020 budget that will be considered on Monday the 30th. There are a number of items which were not in the 2019 budget for which the commissioners believe they can encumber funds. I consider this to be a misappropriation of funds from the 2019 budget; other than the funding for Community Health Services Network, LLC., the monies being spent are for items which lacked a 2019 appropriation.

A long running dispute over appropriation authority seemed to have been settled with a ruling from the Belknap Superior court. On March 3, 2015 the county commissioners signed off on a stipulation agreement. The ruling reaffirmed the provisions of RSA 24:14 and further acknowledged that the delegation has appropriation authority down to individual lines in the budget. With no regard for the law and the clear direction of the delegation, the commissioners have allowed 5 departments in the nursing home to exceed their appropriations for 2019. The commissioners, having been caught, are now claiming that the nursing home is a department all to itself. This is pure nonsense. Department defined; a category consisting especially of a measurable activity or attribute. In our budgets these are segments which are divide out and considered separately. For instance, ‘outside agencies’ are not part of the county government, yet they are grouped together as a unit within the budget. As to the nursing home, the minutes of the delegation’s votes on February 20, 2019 explicitly refer to 7 of the 11 distinct segments as “departments.” Even commissioner Waring asked about staffing in the “activities department” (only found in the nursing home) at the December 19, 2019 commissioners’ meeting.

The delegation appropriated $30,002,772 to cover county expenses in 2019. As we come to a close of the year we see that final figures for the gift to Community Health Services Network, LLC. has not been determined. So for 2019the only amount given was the appropriation of 2018 of $759,505. The remaining $1,152,510 will be included in the excess taxation figure which the commissioners euphemistically call ‘operational savings’. That will bring the ‘operational savings’ figure for the year to $1,735,763 (Dec 18, 2019). When we deduct that from the amount appropriated we get $28,267,009 that was needed to run the county in2019. Actually that number is a bit high and does not account for the misappropriations made during the year.

On the revenue side of the budget game the county brought in $810,932 more than estimated. This is money you were taxed and will be rolled into the fund balance. Fund balance is money the commissioners prefer to keep in their accounts so they have it available, and you don’t. 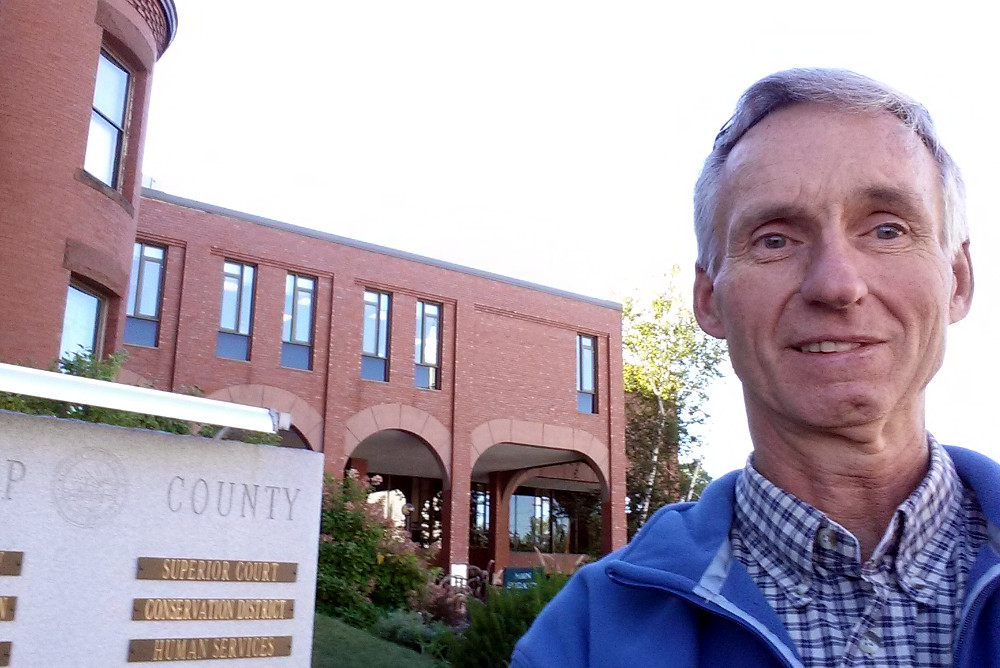 On Thursday,December 19, 2019 the Belknap Superior court issued its ruling in the case of Town of Belmont v. Mike Sylvia. The court ordered an injunction against the use of my property, and awarded attorney’s fees to be paid to the town. They held in abeyance any fines for prior use of my own property.

At the heart of this issue is the people’s right to ownership of property. To own a thing is to have control of that thing. If one owns and controls an object then he has a right to use that property as he sees fit as long as his use harms no other. If one is truly an owner there is no need to ask for permission to use that which is owned. To be required to seek permission to use ones own property, such as applying for a building permit, is contrary to our right of holding property.

The New Hampshire constitution, upon which our government claims authority, is a beloved document which I hold in high esteem. It predates the founding of the united States and is by far a better constitution than the U.S. Constitution. It was made clear prior to the formation of the New Hampshire state government that the construction of a government could not come into being until the inalienable rights of the people were documented. Therefore, before the republic was established in Part II of the New Hampshire constitution, Part I reserved to the people of the state all the essential rights which were unnecessary to a proper government. Only after our rights were reserved did we then parse out powers that would be necessary to a just government.

We the people of New Hampshire surrendered up only such authority as would be needed to form a society which could work together for the protection of all citizens. This exchange was to protect our rights to life, liberty, property and the pursuit of happiness.

Among the proper roles of our government is to assure against trespasses upon its citizens. If the actions of one person reaches into harming the rights of another citizen the state was empowered with what is know as the police power of the state. All of the reserved rights of Part I were held as private rights which would be protected by the state; lacking that protection the constitution is null.

In the case at hand the court has ruled that I have harmed the Town of Belmont. I did not go to the Town and ask for permission to use my property. The harm alleged is that I have violated a Town ordinance. I posit that the Town’s ordinance is in violation of my Part I protected right to the ownership and peaceful enjoyment of my property. As we all should know, any law made in violation of our constitution is a nullity. The Town has not protected my right to property, it has failed to do so.

As we go onward from here, I want to express my gratitude for friends and neighbors who have supported my efforts along the way. I have stood not only for myself but for the people of Belmont and beyond. So, I ask you; do we accept that our property is not our own?

Send an e-mail with your thoughts; mike@mikesylvia.org

The Belknap county commissioners have released their proposed budget for 2020. Their budget would spend $31,982,847 which is 6.6% more than the 2019 budget. They provide for spending $1,500,000 from unrestricted fund balance which will result in a tax increase of 6.4%. The county delegation will meet Friday, December 13th at 7:00 to receive a presentation and get public comments.

These figures will stun anyone that is at all familiar with economics. Belknap county has an aging population and growth is very limited. If the county was growing, and keeping pace with inflation (2.5%), the proposal would still be double what would be reasonable. When government outruns the pace of economic growth and inflation, the stage is set for an unpleasant and possibly sharp decline.

If the delegation is to take its responsibility for this budget we will need to reduce the commissioners’ request substantially. Fortunately, the commissioners allow plenty of room to adjust their inflated desires. If we look at the 2019 budget and compare it to actual spending we’ll see there was more than a million dollars stuffed in the budget that was unnecessarily taken from the pockets of the county taxpayers.

Let me show you the money. In 2019 the delegation appropriated $30,002,772 to cover county expenses. From that we deduct the ‘operational savings’(unspent budgeted funds) of $1,162,812, we get $28,839,960 which was spent on county operations. This amount also includes spending of funds that were not appropriated by the delegation. To get to a realistic budget number for 2020, take the amount spent in 2019,subtract the amounts spent without authorization and add 2.5% for inflation. That will put you in the neighborhood of $29.6 million.

Rest assured, that real world math would not please those that have to manage the budget. And I wouldn’t stop there. That budget includes an unconstitutional gift to a private corporation (Community Health Services Network, LLC.) of $620,000. [Art.]10. [Right of Revolution.] Government being instituted for the common benefit, protection, and security, of the whole community, and not for the private interest or emolument of any one man, family, or class of men… Taking of taxpayers’ money and giving it to a corporation does not fit the standard of ‘common benefit’. So,there we are, a budget that should be $29 million not $32 million.

If we look back to the 2019 budget process, the executive committee was tasked with producing a budget. We brought a budget of $29,144,306 to the full delegation (note that this was $300,000 more than needed) and it was rejected. The commissioners sold their fear campaign to a new crop of legislators and the taxpayers coughed up an extra $850,000 to ensure no management skills would be required.

If the delegation gets anywhere near a budget that I could vote for, expect a lot of drama from County Drive. I’m willing to suffer the whining if the taxpayers don’t get gouged in the process.